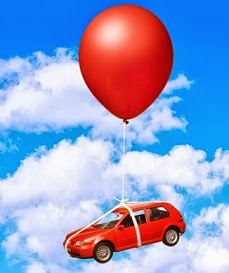 Edward Oberg, currently on hiatus from the insurance game, now spends his time reading pulp genre novels, shaking his head in dismay at the state of movies these days, haunting yard sales and hunting for the monster brook trout that delights in mocking him. He has vowed to defy the accepted wisdom regarding boring insurance reps by being extremely interesting.

The 1989 classic (it’s classic to me at least) action/sci-fi/comedy Back to the Future II introduced its audience to a wild, sci-fi, semi-dystopic cyberpunk-y future in which businessmen wear many ties at once, the Japanese pretty much run the United States, holographic sharks leap at you from movie marquees, bio-enhancing implants are available to the local bully, hovering skateboards abound and, most importantly, hovering cars are the most common form of transportation. (And they run on garbage-fueled cold-fusion reactors.) So when will all of this come to pass, according to the movie’s creators? In the year… *dramatic pause* …2015.

I remember watching that when it was released and deciding that while most of it was probably not going to happen, we’d probably at least have a few flying cars zipping around by then. Well, there are only a couple of years left until 2015 and we have yet to see them. Disappointing as that is, there’s a fairly good reason for it- all the flying cars even prototyped up have been extremely expensive and profoundly impractical, plus our infrastructure couldn’t really support them. However, that infrastructure is more than capable of supporting smarter and more efficient cars- it already is supporting them actually.

So the good news is: while Back to the Future II’s flying cars won’t be hitting your local showroom in the near future, your vehicular sci-fi fantasy need not be totally abandoned. The viability of self-driven, super-smart automated smart cars like those from say… Minority Report are looking like a certainty. And as our cars evolve, so must our strategies for insuring them.

Car Brains: Getting Better All the Time

It’s hard to know exactly how exactly increasing automation in automobiles will influence rates. Based on the current trends of computer and technology enhancement in cars it’s tempting to suggest that buyers could just rely on an insurance rate-lowering metric that says: the more computerized features a vehicle comes equipped with, the less your insurance will cost. Safety innovations (in rough order of increasing technological advancement) like seatbelts, crumple-zone improvement and reinforcement, anti-lock brakes, traction control, airbags and so on were all controversial (and some still are) to varying degrees. Now they’re all pretty much must-have standards that come as an insurance-rate reducing safety package.

Newer automotive automation features like Electronic Stability Control (ESC) seem to bear that trend out. And more so than the other features mentioned, ESC is also one step closer to the eventual goal of actually automated driving. Using a computer program to detect and predict loss of control, slides and skids, ESC automatically engages brakes optimally and individually; some versions also reduce engine power. Importantly, it does so while still allowing the driver some control.

They’ve proved to be very effective- according to data compiled by The Hartford, ESC systems lower the risk of a single car fatal accident by half and slash the risk of rollover by as much as 80%. It’s no surprise that this is the case. Considering that the vast majority of all vehicle accidents are directly attributable to human error, it would seem like the higher an auto’s CPU-to-you ratio is, the lower the risk. Computers don’t get distracted, sleepy, or intoxicated, they never feel compelled to text, eat or answer the phone while driving, they don’t get road rage, etc. They can also compute, analyze and react to certain types of data way faster than people can.

So Automation is the Answer and All of Our Super-Safe Robot Cars Have Super-Low Insurance Rates, Right?

Well… yes and no. Here’s the problem: as mentioned, your car’s brain can blow you out of the water when it comes to reaction time or the analysis and the incorporation of data like speed, the tiny details of braking in relation to road conditions, the precise distance between you and the vehicles around you and so on. But, there’s one area in which your super-smart robot car is a totally stupid idiot compared to you: interpreting and reacting to human beings.

There’s a fair chance that every time you’re behind the wheel you unconsciously and casually observe, analyze, interpret and react to human interaction stuff that would elude even the most advanced computer. For example- if you pull up to a four way stop slightly after the driver to your left and you see that driver looking at you and tentatively pulling forward slightly, chances are you would ease off the gas and let them go. They’re cautiously signaling to you that they are indeed planning to go first. However, if you glance over and that driver’s stopped completely and staring off into space, chances are you’ll go.

Beyond the subtle, nearly infinite inter-personal communication cues we give each other, all other humans on the road are still wild cards. Even the best automated vehicle probably isn’t going to notice the erratic, intoxicated, unstable or aggressive behavior of another driver some distance away or follow that intuition gained from years of human interaction which tells you to back off, avoid, slow down, speed up or make whatever other choice because a computer’s working with logic and data, not mess humanity.

What it boils down to is this- the safest roads will be those traveled entirely by automated vehicles that are all following the same rules and all make the best, most-logical driving decisions based on the data at hand. While technological advancement is going to make the roads safer, until all vehicles are automated giving a human being some measure of control is probably going to be a necessity and you don’t necessarily want to be the only person being driven by a computer on a person-filled highway. However, any technology that improves a human driving/avoidance/reaction function rather than replacing it is going to be a hit with the insurance companies and your rates will reflect that.